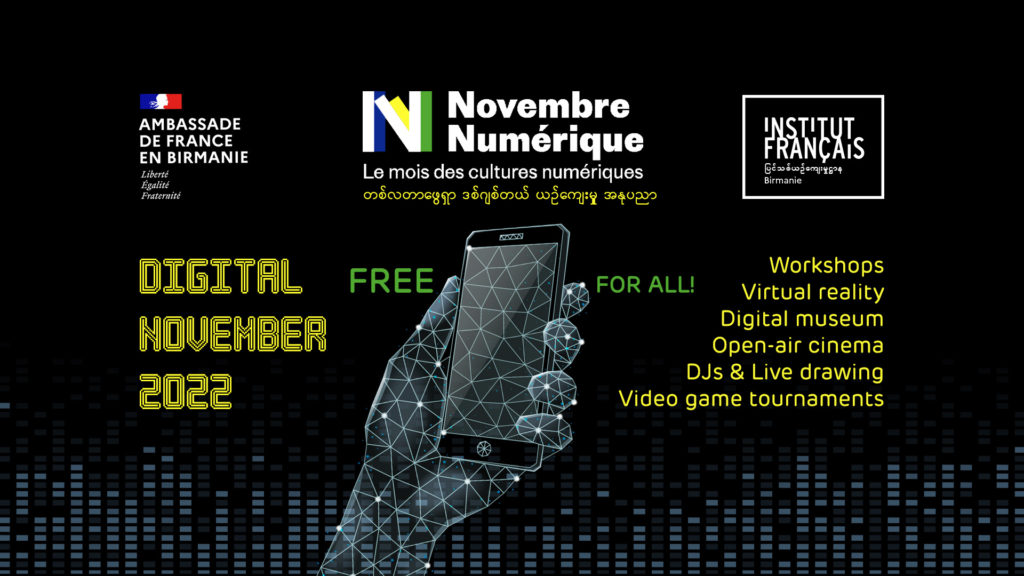 Institut français de Birmanie (IFB) is organising “Digital November 2022” (Novembre Numérique 2022), under the theme of a multidisciplinary digital festival in Yangon, from 1st to 27th November 2022.
Since its launch in 2017, Digital November, formerly known as “Pix’ART Digital Art Festival” in Myanmar, has become the digital highlight of the worldwide French cultural network, shining the spotlight on digital cultures in all their diversity.
In this 2022’s edition of Digital November, the IFB is presenting you a series of workshops on various digital subjects, Virtual Reality experiences, days to access the “Micro-Folie” digital museum, a video game tournament with a winning prize, open-air cinema evening, and musical and visual entertainments. The festival will culminate on the evening of 26 November with a live-drawing setup and DJ performances.
All activities are free of charge for everyone. 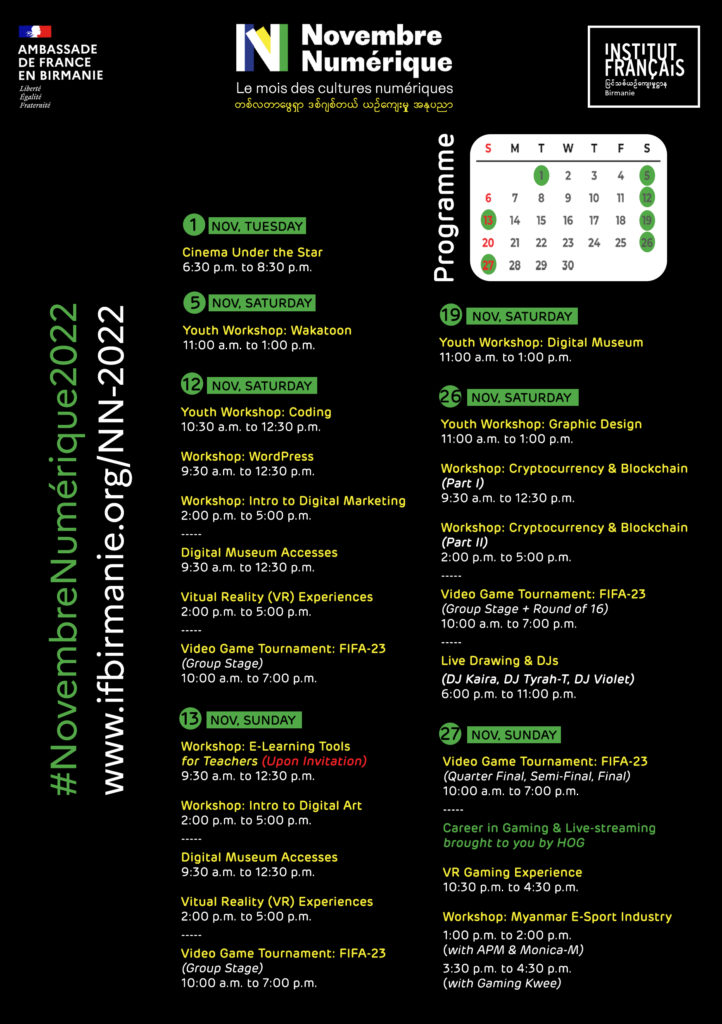 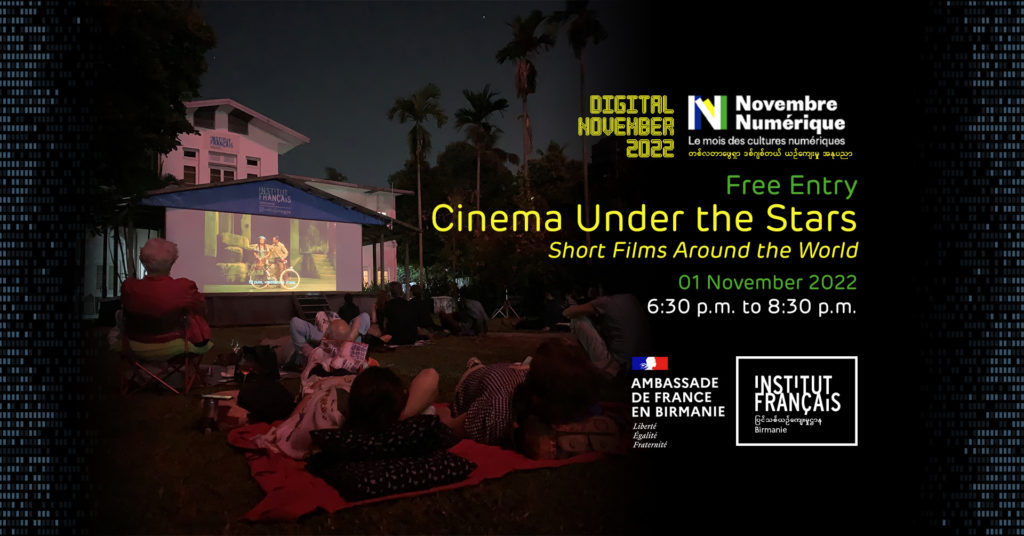 Read More
These 6 short movies subbed in English will make you travel across continents and stories through different societal experiences.
(1) Haut les coeurs (Fiction, 15mn)
(Shortlisted at Cannes Festival 2021)
Kenza, 15, and her little brother Mahdi, 13, regularly stage themselves on social media in an escalation of petty cruelties and humiliations. Today, during a bus trip, Kenza puts her little brother, naive and romantic, to the test: to make a declaration of love, now, to Jada, a girl whom Mahdi loves, but who does not know him. Pressured by his sister, Mahdi ends up going.
Trailer: https://www.youtube.com/watch?v=GeUepFiVkj0…
(2) Henet Ward (Fiction, 23mn)
(Shortlisted at Cannes Festival 2021)
Halima, a Sudanese living in Egypt, does henna tattoos. For her job, she travels to a neighborhood in Giza to prepare a bride. His seven-year-old daughter Ward accompanies her and begins to walk around and discover the places.
Trailer: https://www.youtube.com/watch?v=tGksrs2kDTs…
(3) Bach-Hông (Biography, animation, 18mn)
Jeanne, born in 1959 in Saigon, lived a golden childhood, protected from the war which then opposed North and South Vietnam. Fascinated by horses, Jeanne rides a mare named Bach-Hông. But on April 30, 1975, the Communists seized Saigon.
Trailer: https://www.youtube.com/watch?v=6lWtG_yxo_Y…
(4) Les Divas du Taguerabt (Documentary, 15mn)
Karim Moussaoui wonders what comes closest to an Opera in his country, Algeria. Accompanied by a film crew, he travels to the desert in search of women who he was told were singing the “Taguerabt” (Gourara song) in caves. As they travel, a doubt arises: does this place really exist?
Trailer: https://www.youtube.com/watch?v=-0ASt0upHCM…
(5) Azumah: The Ghanaian Hero (Biography, animation, 13mn)
Azumah Nelson, an underdog, has two weeks to prepare for his first international fight. While he loses by K.-O. technical in the last round, he begins a warrior’s journey to become the best African boxer of all time.
Trailer: https://www.youtube.com/watch?v=c51nLG6Nd4k…
(6) The night of the plastic bags (Fiction, animation, 18mn)
(César 2020 of the best animated short movie)
Agathe, thirty-nine, has only one obsession: to have a child. She will find her ex, Marc-Antoine, who mixes techno in the Calanques in Marseille. As she tries to convince him to get back together, plastic bags come to life and attack the town.
Trailer: https://www.youtube.com/watch?v=YCuktuhTMBI… 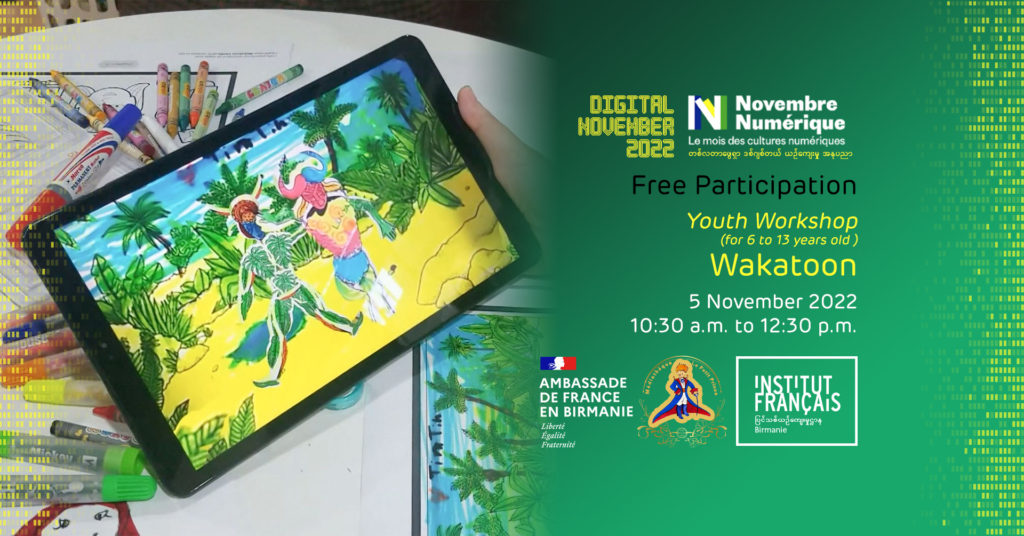 Read More
Institut français de Birmanie presents you with a series of Saturday youth workshops.
As Novmeber is the month for digital culture in France, the Saturday Youth Workshop will be organised to provide the children with an opportunity to discover French innovation in the field of digital creation.
In this discovery of workshops at the IFB media library, children aged 6 to 13 can unleash their thirst for knowledge while having fun and informative facts.
The 20th workshop will focus on WAKATOON activities, by which children can transform their 2D drawings and colourings into live animation showcases. 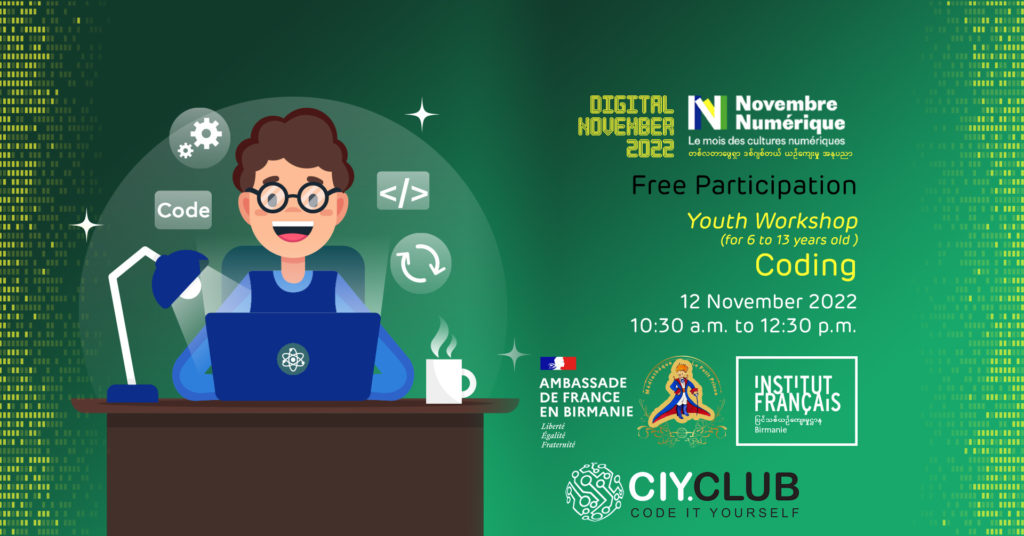 Read More
Institut français de Birmanie presents you with a series of Saturday youth workshops.
As Novmeber is the month for digital culture in France, the Saturday Youth Workshop will be organised to provide the children with an opportunity to discover French innovation in the field of digital creation.
In this discovery of workshops at the IFB media library, children aged 6 to 13 can unleash their thirst for knowledge while having fun and informative facts.
The 21st workshop will focus on coding.
Registration is needed as the workshop is organised only for 20 children.
Register here: https://docs.google.com/…/1FAIpQLSdMROlpCfUBFB…/viewform
—–
Chances to cultivate your children to become digitally creative-minded precious ones!
Do your children become addicted to phones and computers? Technologies are rapidly changing, so there is no field where one can forget those tech things.
It is wise to prevent your children from becoming a slave to digital tech. But, it is futuristic to bring opportunities to them so that they can use the tech and generate their ideas as digital literates.
In collaboration with CIY.CLUB, based in Australia, the Institut français de Birmanie would like to introduce your children to the Coding subject. The approach we would present to your precious one during the workshop is the international coaching system, which is different from the classroom learning process but focuses on the individuals’ strong and weak points.
At the same time, we will explain Block Coding to the children so that they can develop their computational thinking and understanding of algorithms.
Furthermore, the method of conduct is Gamification, in which children will enjoy coding and immerse in logical thinking activities. 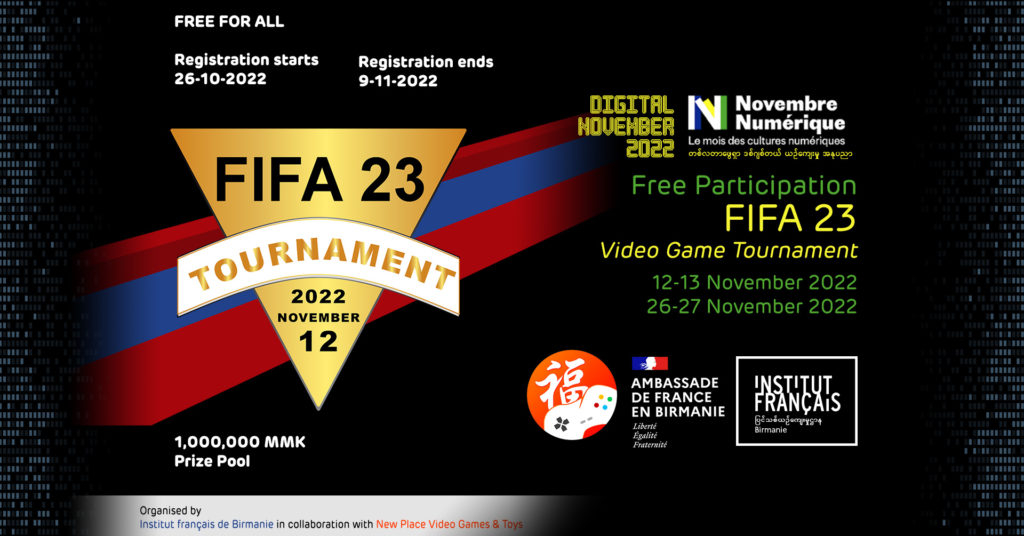 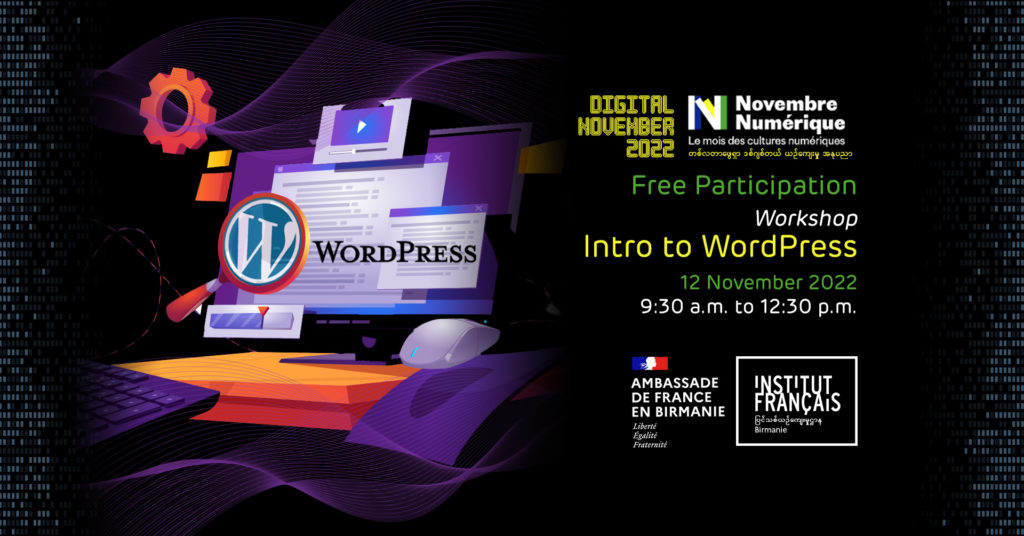 Read More
To participate, please register at https://bit.ly/3fOgSuF
If you have your own laptop, it will be nice to bring it.
Topics covered during the workshop
1. Introduction to WordPress
2. Installation & Customization
3. Publishing Contents
4. Using Plugins to Enhance WordPress
5. Optimizing WordPress Performance
6. Keeping WordPress Secure
About Facilitator
Linn Htet Myat has been working as a network engineer and web developer at Winner Computer Group since 2013. He is also a part-time instructor at National Management Degree College. He received his Bachelor of Engineering from West Yangon Technological University in 2011. Currently, he works with Myanwei Digital Solutions and provides technical support to local and international businesses. 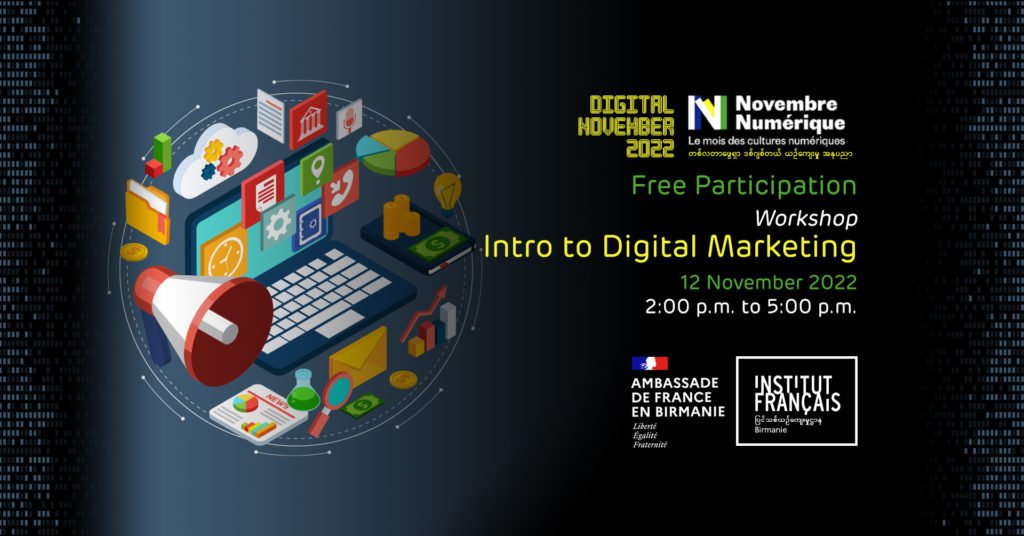 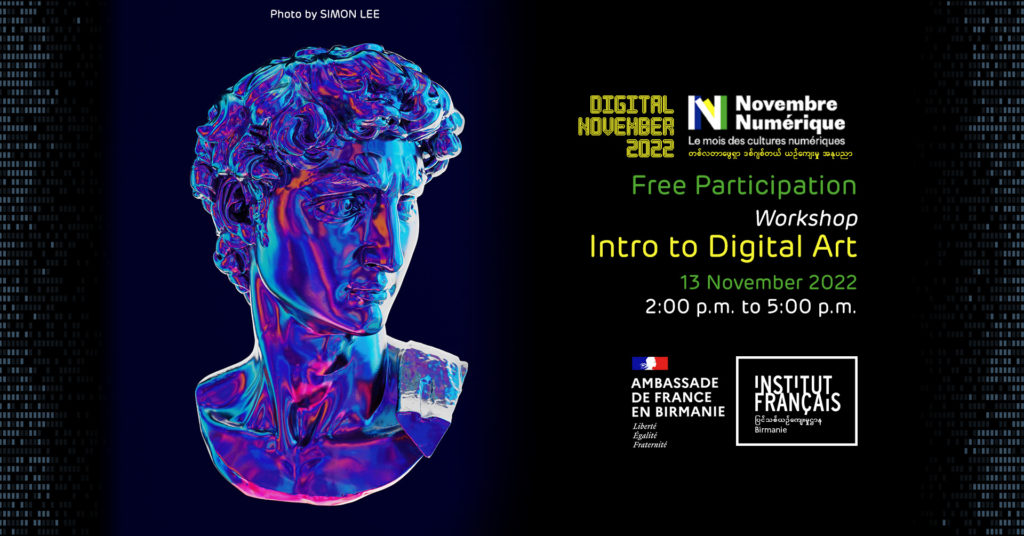 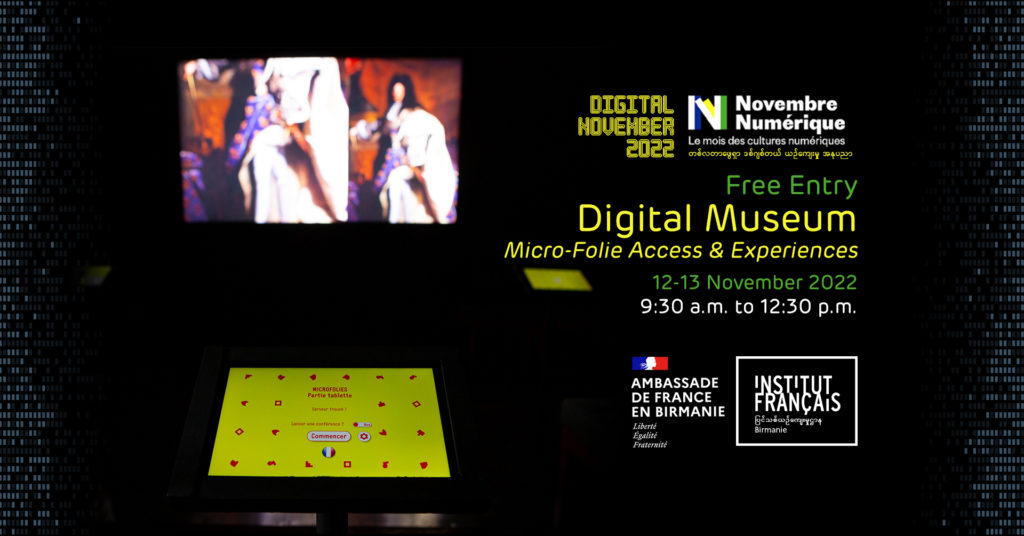 Read More
“Micro-Folie” Digital Museum
The Micro-Folie Project, developed by the Paris’ Parc de La Villette, works to highlight hundreds of pieces of iconic art from national institutions across France in the form of a digital museum. Since the first edition of Pix’ART Digital Art Festival in 2017, IFB is proud to present you with the finest of the finest masterpieces around the world in this digital establishment. 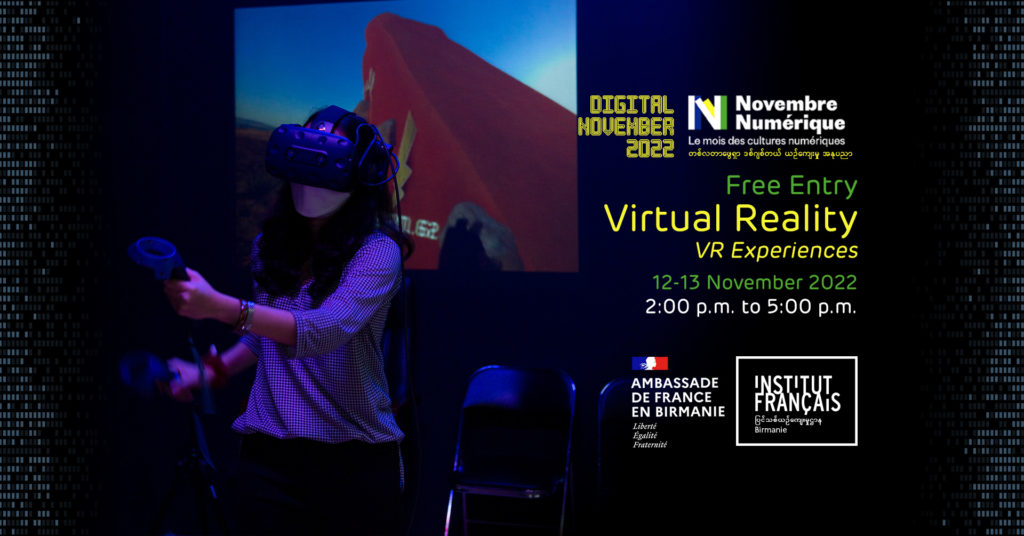 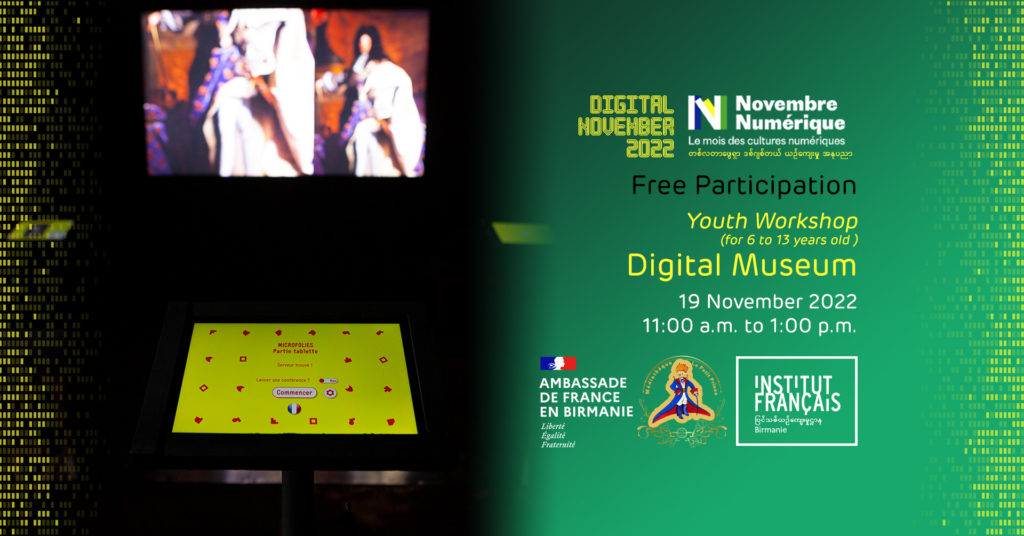 Read More
Institut français de Birmanie presents you with Saturday youth workshops.
As Novmeber is the month for digital culture in France, the Saturday Youth Workshop will be organised to provide the children with an opportunity to discover French innovation in the field of digital creation.
In this discovery of workshops at the IFB media library, children aged 6 to 13 can unleash their thirst for knowledge while having fun and informative facts.
The 22nd workshop will focus on Digital Museum where children can enjoy digitised famous artworks from around the world and learn more about human civilisation and creativities. 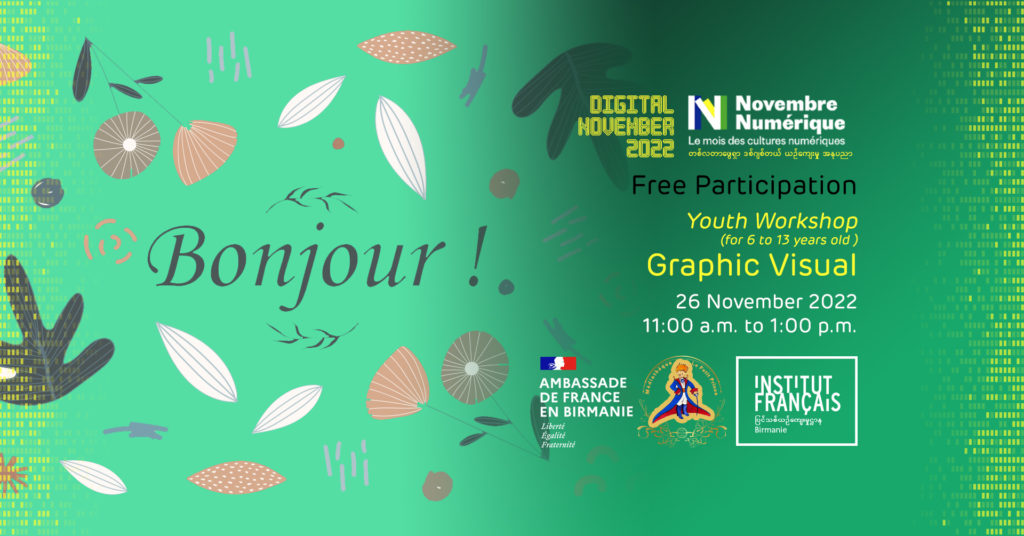 Read More
Institut français de Birmanie presents you with Saturday youth workshops.
As Novmeber is the month for digital culture in France, the Saturday Youth Workshop will be organised to provide the children with an opportunity to discover French innovation in the field of digital creation.
In this discovery of workshops at the IFB media library, children aged 6 to 13 can unleash their thirst for knowledge while having fun and informative facts.
The 23rd workshop will focus on Graphic Visual by which children can do theire own cration in this highly visualised era. 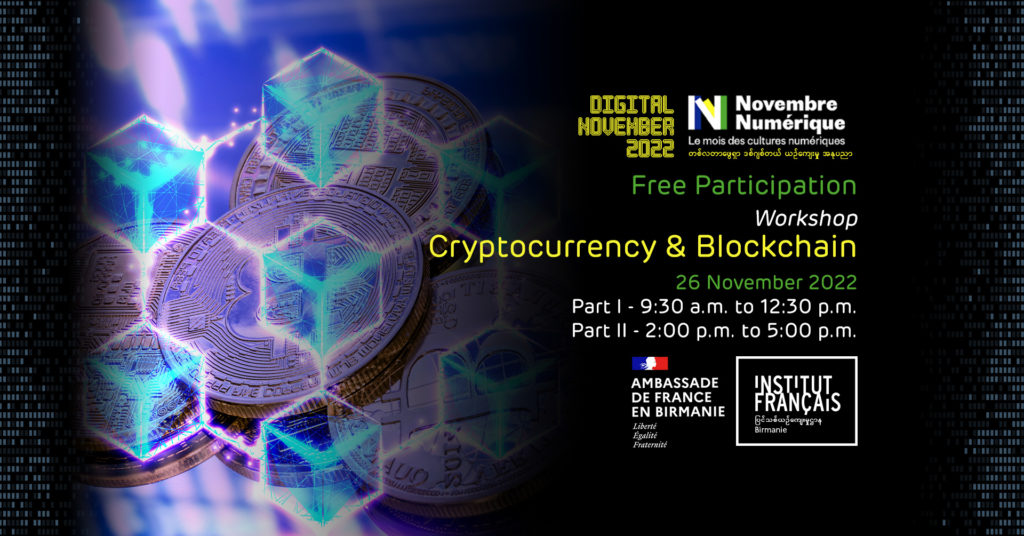 Read More
To participate, please register at  https://bit.ly/3fOgSuF
Attention
Although there are two parts to the workshop, Part II is the continuation of Part I. It means the same things will not be discussed twice. If you want to know everything about Cryptocurrency and Blockchain, you may need to participate in both workshop sessions. No worry! There is a 1.5-hour break in between.
About Facilitators 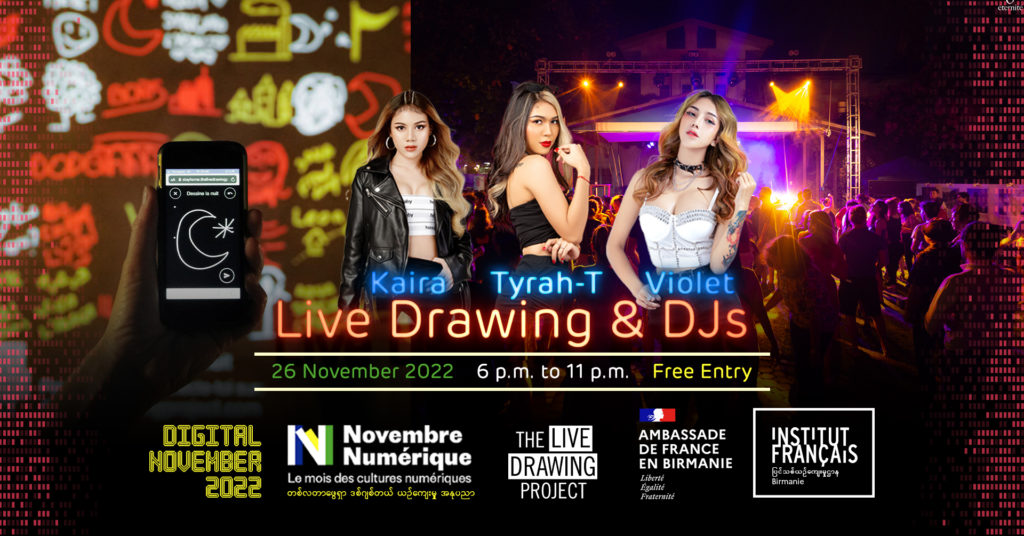 Read More
Live Drawing
During the DJ evening, you will be able to draw on your phone and see your creations being screened in the garden! All you will have to do is capture a QR code in our garden, then you will have access to the Live Drawing Project app on your phone. Draw on your screen according to the theme of the moment, and you will see your drawing screened among the others next to the DJ booth!
DJ Line-up 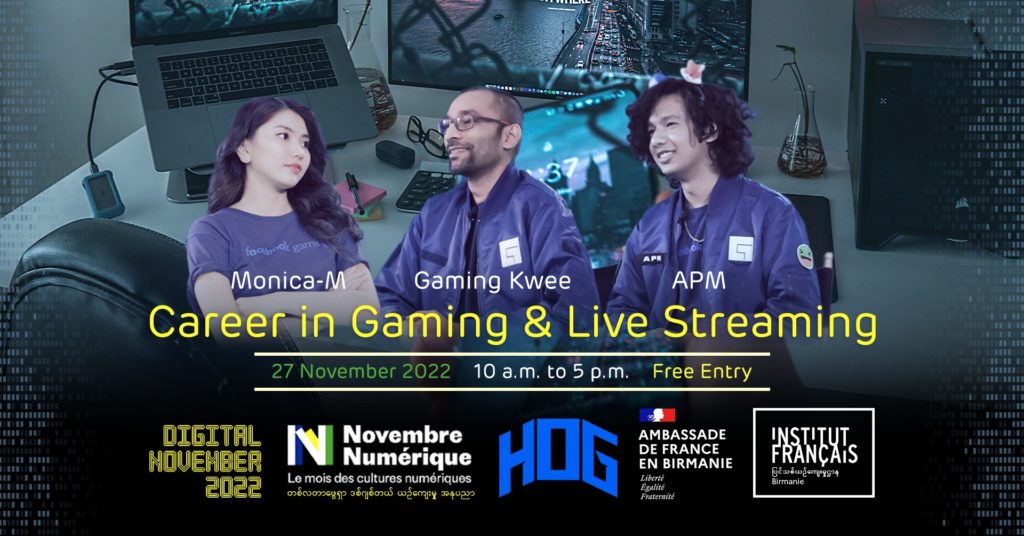 Read More
As part of Digital November 2022, the IFB is collaborating with HOG e-Sports Organization to present you with e-Sports, Gaming, and Streaming workshops and experience-sharing sessions including VR and other interesting activities.
To participate, please register at https://forms.gle/XmDAr6K9ehwgXscv7

HOG will proudly present you with the following programme:

About HOG
HOG e-Sports Organization has been the Official Exclusive Partner of Facebook Gaming since 2020. Find out more about HOG at http://hogesports.gg/ 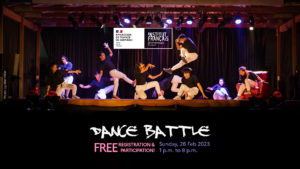 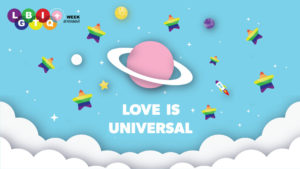 Following May 17 rainbow flags raising in Yangon, and to mark the international Pride month in June, several diplomatic missions and cultural centers across Yangon are partnering to host a LGBTIQ+ Week Myanmar, a series of events to promote LGBTIQ+ rights. 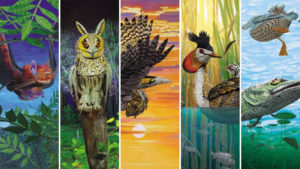 On the occasion of World Environment Day, the French Institute welcomes you for an animated film for young audiences, and two short episodes of the “Product” series will be available at the IFB’s “Le Jardin” café.