The French Embassy in Myanmar and the French Institute in Myanmar (IFB) have been celebrating International Women’s Day on March 8th since 2019, with a week entirely dedicated to the promotion of women’s rights. During the first two editions, the enthusiasm of the public and the strong echo of the various events in the press ensured excellent visibility of the action of France in Myanmar, seen as a major actor in the defense of women’s rights. Public events organized at the IFB have helped reminding that the fight against gender inequalities and the promotion of women’s rights are one of the top priorities of France’s international action.

More than 1,500 people participated in the events of this first edition. On March 5, 2019, the opening of the exhibition “Women, We Men” by the young Myanmar painter Chuu Wai Nyein, was the opportunity to officially launch the first week of women’s rights and to condemn, through the works of the artist, the pressures and violence women face in the country and around the world. The opening was followed by an evening around the theme “Women and Peace”, opened by a performance by the Myanmar artist Ma Ei, with the broadcasting of documentaries from the Yangon Film School (YFS) – partner of the Fund for “Innovative Projects of civil societies and coalitions of actors ”(PISCCA) of the Service for Cooperation and Cultural Action (SCAC) of the French Embassy in 2017 – and of the Women’s League of Burma. These films focused on the consequences of armed conflict on women and the importance of their participation in the Myanmar peace process. The films were then discussed as part of a round table made up of five representatives of the Myanmar civil society. 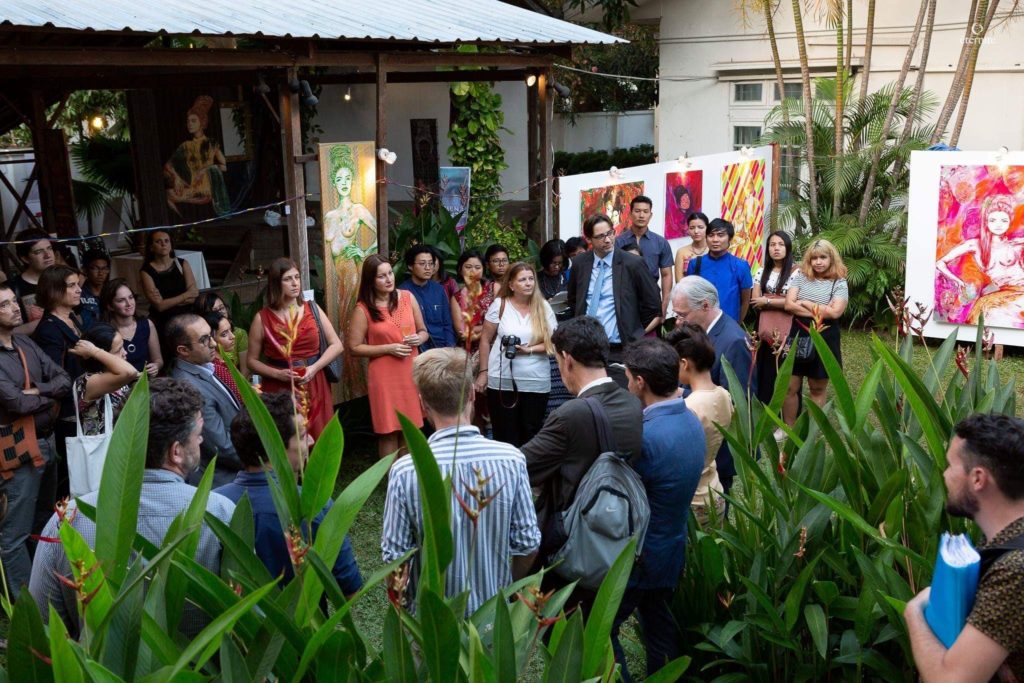 The IFB also hosted events organized by civil society organizations, such as a press conference by the Women’s League of Burma and the launch of Pan Ka Lay’s menstrual health awareness campaign. A third event, co-organized by the IFB, took place on March 4, 2019 at Hotel G Yangon to promote the “#Ask for zarni” campaign, aimed at combating harassment in bars in Yangon.

On March 7 and 8, 2019, the IFB hosted two performances of the “Vagina Monologues“, one in English and one in Burmese. The latter was a real first. The play had only been performed in Myanmar once before (in 2018) and in English only. The representation in Burmese made it possible to reach a wider audience and to start a dialogue on sexuality and the perception of the female body – taboo subjects in Myanmar.

From March 2 to 6, 2020, 12 events were organized at the Embassy, at the IFB and at the French-Myanmar Chamber of Commerce and Industry (FMCCI), as part of Women’s Rights Week. These gatherings were an opportunity to address issues related to the business world, Olympic sports, arts, as well as the press, humanitarian action and activism, and the Burmese political life within the context of the 2020 general election.

The 2020 edition began on March 3 with the outdoor screening of the French film “Comme des Garcons” (Let the girls play), a comedy by Julien Hallard telling the story of the first French female football team. A hundred people, including a large number of young footballers, attended the event.

The IFB organized the exhibition “My Feminism Upon Your Walls“, the result of a collaboration with the French feminist collective “La Rage”, which collects feminist posters from around the world. The collective mainly had posters from Europe and Latin America, so the French Embassy and the IFB issued in the summer of 2019 a call for contributions in order collect posters from Myanmar and from Asia. These new posters were added to the collection and were exhibited for the very first time in Yangon as part of this event.

On March 4, 2020, Daw Htar Htar, founder of the NGO Akhaya Women Myanmar, presented, during the opening of the exhibition, her analysis on feminism in Myanmar as well as her organization’s contribution to the exhibition. Akhaya Women Myanmar provided the poster which was used for all of the designs created for Women’s Rights Week (see image below). 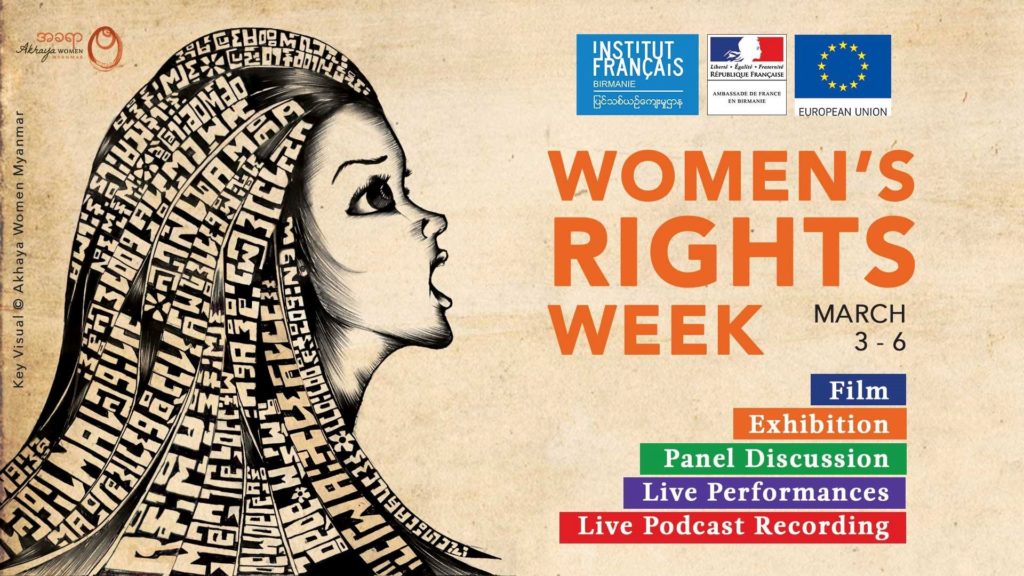 The evening of March 4 continued with the very first live podcast recording in the country. Feminist activist Nandar of the Purple Feminists Group interviewed social media influencer Win Min Than to discuss the issue of “consent” at the heart of women’s rights law under review in Burmese parliament. The event reached far more than the 120 people (a majority of Myanmar young women) who were present. The podcast video has been viewed by more than 30,000 people and shared 500 times on social media.

March 5, 2020 was a day to discuss to the place of women in the general elections, scheduled for November 2020. This event, organized on behalf of the European Union, consisted of a round table on the place and role of women in the upcoming elections, how they can participate and the challenges they face. The panel was made up of members of the Yangon Regional Parliament and of the Myanmar civil society. Booths of civil society organizations working on the issue were also set up for the occasion and become a place for sharing and debating.

Women’s rights week ended on Friday March 6 with a special event: a bespoke visual and musical performance by three French artists. This show featured key speeches and images of female figures who contributed to the progress of women’s rights around the world. The evening began with a choreographic performance aimed at promoting the safety of girls in Burma, as part of a campaign launched by the organization “Bridge”, in collaboration with the non-governmental organization “Girl Determined”. The artist Youn Ni Ko, famous singer of the local scene and spokesperson of the campaign, played some songs, including the manifest song of this campaign.

Over the course of the week, around 800 people participated in the events organized at the IFB.

During the two editions, the Embassy organized meetings hosted by the ambassador with representatives of civil society organizations (CSOs) working on the women’s rights, female athletes, scientists, women working in humanitarian action, female politicians, journalists, as well as visual artists.